The daughter of one of the most famous boxers of all time, Floyd Mayweather, was arrested yesterday. 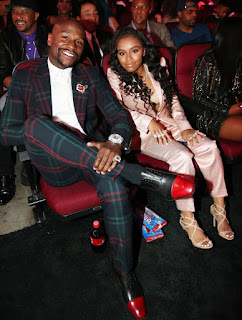 Yaya Mayweather was arrested after allegedly stabbing another woman.

The woman, Lapattra Lashai Jacobs, is said to be NBA Youngboy's baby mama.

Jacobs was at the rapper's home in Houston, Texas when Mayweather came over and the fight ensued.

Jacobs sustained two stab wounds to both her arms and had to be rushed to hospital by emergency services.

Mayweather had confronted her in the kitchen when the fight started and she grabbed two knives and rushed towards Jacobs slashing her arms.

Paramedics transported the victim to a hospital where surgery on her arms was performed.

The Blast reported that her injuries do not appear to be life-threatening.

TMZ released video footage of the victim lying on a gurney being put into an ambulance as Youngboy stood nearby: