There's a popular meme gaining steam of these dancing pallbearers from Ghana. 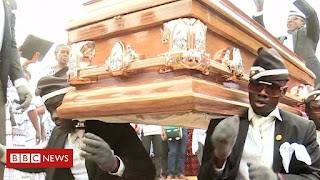 If you haven't seen a version of it yet then you're living under a rock.

The memes shows people doing dangerous acts before cutting to the pallbearers dancing to the EDM song Astronomia by Tony Igy.

Benjamin Aidoo, who leads the dancing pallbearer troupe, told the a BBC reporter: ‘I decided to add choreography to it so if the client comes to us, we just ask them: “Do you want it solemn or do you want a bit more of a display? Or maybe you want some choreography on it?” ‘They just ask and we do it.’

Here are a few of the funny memes people are creating and sharing on different social media platforms:

Just alerted to an INCREDIBLE new meme format that rivals we got him pic.twitter.com/yLz2onyggn