The Prince of Wales has mild symptoms but is in good health although he tested positive for the virus. 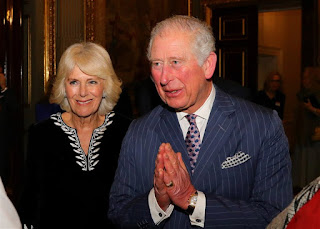 He is first in line for the British crown.

Prince Charles who is 71 years old is in self isolation at Balmoral Estate in Scotland. The Prince is WFH.

He has had many public engagements during the past weeks but it is difficult to say where he contracted the virus from.

A video of him practicing the Hindu Namaste instead of the handshake in line with social distancing went viral on many social media platforms. People found it very funny to see the future monarch putting his palms together in the greeting.

There has been over 8000 cases reported thus far in the UK with at least 422 deaths.

Many countries are going into lockdown to curb the spread of the dreadful virus. People are being advised to Stay At Home.
Posted by Frank Rudy at 5:20 AM