Pick n Pay under fire over video of elderly man

Pick n Pay has been getting bombarded by twitter users after a video of an elderly gentleman went viral on the social media platform. 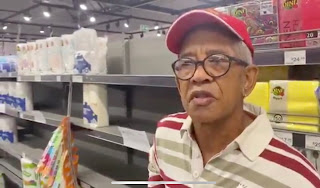 Yesterday Pick n Pay, Woolworths and a few other stores announced that they will open their doors from 7-8am to allow pensioners only to shop during these high threat times for elderly people.

Walied Josephs was one of these pensioners that was looking forward to shopping this morning without the hustle and bustle of the usual public. When Joseph and other shoppers entered the Pick n Pay store the shelves were empty.

When Joseph confronted the manager, Johan, on the lack of toilet paper on the shelves he replied, "Unfortunately, you must understand. I didn't invite you to do your shopping here."

The lack of empathy for the shoppers could be seen in the video when Joseph gets emotional saying that he had to get up unusually early and brave the traffic to get to the store only to see it bare.

It's all well and good that Pick n Pay opened their doors early for pensioners only but what's the point if there's nothing on the shelves for them to buy. It was just a waste of time for many and a risk to their well being.

Pick n Pay's response to many tweets about the incident was that the matter was being addressed by their management team.

Was the manager wrong in his response? Should Pick n Pay have foreseen the problem when they made the announcement giving the elderly their special shopping hour? 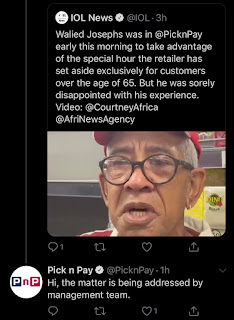