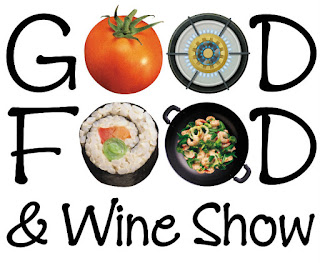 We decided last minute to attend the Durban Good Food and Wine Show this past weekend. Whenever we go for these type of events at the Durban Exhibition Centre we try to go on the last day as this is when most of the exhibitors try to get rid of their show stock at really bargain prices.

This year there were a few celebrity chefs such as Rick Stein, Reza Mahammad, Jenny Morris and more but we went to see Brent Owens because we're fans of the Masterchef TV series. 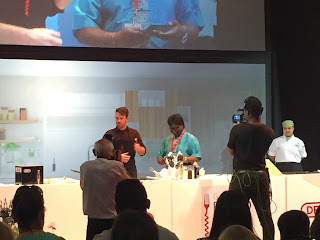 Brent won last year's Australian Masterchef and he had a show on Sunday. In his show he prepared a Crispy Pork Belly and he had Durban's own celebrity Logie Naidoo assist him with the plating. We were lucky to taste this Masterchef's dish after the show and with good reason we know why he won.

Leaving Brent's show we walked into one of the open free shows hosted by Claire Allen who was a finalist in last years Masterchef South Africa. She asked the same question about Agar Agar that Brent asked in his show and since I knew the answer I immediately raised my hand and gave the answer. To my delight I walked away with a preservatives set. 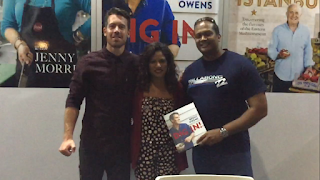 We also ran into Roxanne Wardman, last year's Masterchef SA's winner and her good friend Siphokazi Mdlankomo who was also a finalist on the show. Really cool people.

The Tea Merchant had an interesting stand at the show. Had no idea there were so many different teas available, like Black Forest Fruits, Moroccan Mint and other unusual flavours.

The rest of the show was pretty interesting. A lot of wines from different vineyards all over the country. They had a ticket booklet that allowed you to taste a little wine for one ticket. Eventually some of the wine exhibitors didn't even need the tickets. They were just giving out the wines for tasting. The organisers should do away with that system completely.

The food vendors at the show weren't that impressive. Some food trucks were inside the venue like Fudart and Iwantmycoffee. The food truck concept hasn't really taken off in Durban and it would be a good idea for any willing entrepreneur.

Nouvelle Cuisine had cronuts, almond roca churros. We took a couple of cronuts away and they didn't disappoint. 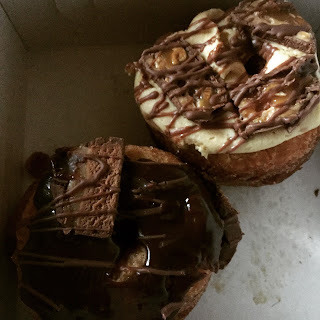 The show was a good experience overall and we're already looking forward to the next one!
Posted by Frank Rudy at 6:44 AM