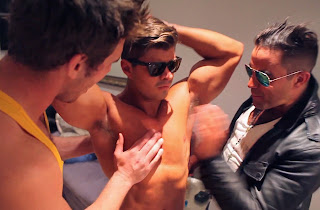 This morning Gareth Cliff mentioned on 5FM a video on YouTube that is going viral in South Africa.

It is called Jozi Shore and it takes the Mickey out of the American TV series Jersey Shore and the Johannesburg East Rand culture of spray tans and gym freaks. It is extremely funny and as of this morning the video has 130000 views!

The video was made by Dean Jay Shamley and Anton Taylor.

Some of the popular quotes viewers enjoyed are:

"You know I don't really trust this place, I don't trust a man whose arms are thinner than a girls"

"The biggest gym in the world, it's the kitchen boet"

Joburg's biggest boets in search of the H2O scene in the Cape. Follow Anton and his gheys, guided by his hipster cousin, while they attempt to "integrate" into Cape Town culture.