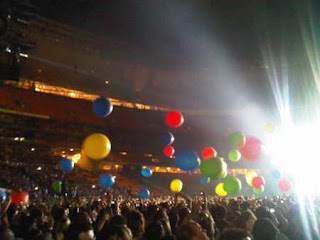 Dare I say… that the Coldplay… concert was better than U2. I wasn’t the only one of this opinion after speaking to people after the concert on the train back and on Twitter the next day.

Four of us from Durban made a roadtrip to Johannesburg, straight to Park Station where we boarded the train to Soweto and FNB Stadium. It was a long 6 hour drive but rest stops and the thought of seeing Coldplay live!

Getting a parking at Park Station was crazy. The security staff was turning away cars. My friend said just drive through you will get a parking. We did and we got.

The train ride was easy and not busy at all. I guess most people took earlier trains. As we got nearer to FNB Stadium we could see the traffic building up on the roads. The Johannesburg International Motor Show was also happening at the same time and that didn’t help the traffic congestion. 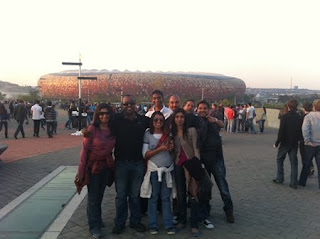 Walking to the stadium was an amazing experience. This was the first time I saw the Calabash up close. It was impressive! I still like the design of Moses Mabhida Stadium back home and think it’s the best.

People were still milling around outside getting drinks and food when the opening act the Parlotones started playing. This must be the largest crowd the Khan and his band have ever played to. I might be wrong but the stadium attendance that day was 66 000.

The great thing about watching an established and big band like Coldplay is that you can sing along to nearly every song they performed. And they enthralled the crowd with plenty of their popular songs.

The highlight of the show was when these huge colored balloons were released into the crowd. It reminded me of the Sony bouncy balls TV advert. What a scene it created! There were also plenty of fireworks and other pyrotechnics!

Close to the end of the show, Chris Martin who kept communicating with the crowd asked us if we wanted to be in their latest music video. Of course the crowd agreed immediately! So at the end of Paradise, for one minute, Chris and his band adorned huge elephant heads and performed. I’m looking forward to see how it came out in the video!

My favorite songs performed were Yellow, The Scientist, Viva La Vida and Fix You. The crowds were still singing the chorus to Viva La Vida when they were leaving the stadium heading back to the trains. It was an experience many will be talking about for a long time and many will regret missing out.
Posted by Frank Rudy at 2:31 PM