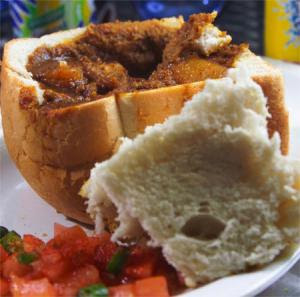 I know I have slacked on updating in a while.

I won a bunny eating competition a couple weeks ago.

Relax. It wasn't a real bunny aka rabbit. It's a Bunny Chow! A bunny chow is a half or quarter loaf of bread hollowed out and filled with curry.

Any curry will do but the most common are mutton, chicken and beans for the vegetarians! All 3 are delicious. My favorite being mutton of course.

So there we were, four musketeers just finished celebrating the Boks win over the Welsh at Boktown in Suncoast Casino and hungry for a chow. Victor said there was the annual Bunny Chow Barometer competition happening at Blue Lagoon where they choose the best bunny chow in Durban!

So we decided to check it out. While the guys were getting the bunnies I heard Muthu Murugan's voice over the loudspeakers. He was looking for 3 men to come up to the stage. I was curious and went to see what was going on.

Nobody was volunteering and as soon as Muthu saw me he called me up. I had no idea what he wanted or what the competition entailed. Two other guys plucked up the courage and join me in front. After a few good jokes and a string of bad ones Muthu got down to business!

We had to finish a quarter bunny and down a half liter Coke. The first one to do so won a prize! The other two guys were quite skinny and didn't stand a chance against me! I wolfed down the bunny chow and downed my Coke like I had been starving for days on a deserted island!

What did I win? A cap, t-shirt and a Coca-Cola branded cooler bag! At least I got my 15 minutes of fame and the rights to brag that I'm the bunny eating champion of Durban! 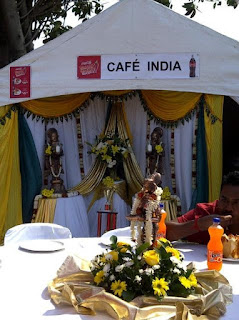 Cafe India won the best bunny in Durban. I tasted it during the competition. I thought it tasted great but it lacked in spice as it was rather mild.

My favorite bunny chow take-away is Gateway Curries which is located inside Mistry's Furniture on the Umhlanga Ridge.
Posted by Frank Rudy at 6:48 AM