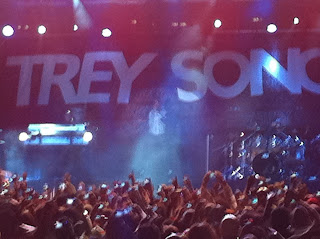 Before this concert I didn't know anything about this artist. The only reason I went was because Avusa Media gave me complementary tickets.

Well it was a full house with mostly young girls. The opening act was a local group called Tear Gas which I never heard of before but apparently is very popular with the younger crowd that sang along to their songs. Clearly I'm getting too old for too quickly!

When the American RnB singer eventually came on stage after making the crowd wait for nearly 45 minutes my ear drums nearly burst as close to 5000 girls began screaming at the top of their lungs!

I must admit that he's a good performer, has a great stage presence and interacts well with the audience although only one song seemed familiar to me.