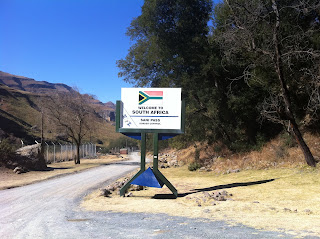 We were given two Land Rover Defenders for the weekend from Land Rover Durban and we decided to put them through the most grueling test. Sani Pass in the Drakensberg. 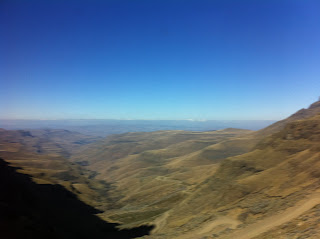 Sani Pass is one of the most treacherous roads Southern Africa has to offer 4X4 enthusiasts and what better way to experience it for the first time than in the "Best 4X4 By Far". The pass starts near Underberg and ends 2874m above sea level up in Lesotho. In the middle of winter it is not uncommon to find frozen waterfalls and ice on the road.

They say that you can see the remains of vehicles on the side of the mountain that failed to make it up. I didn't see any. What I did see were hikers, mountain bikers, a few Toyota Hiace taxis converted into 4X4's and the occasional mountain goat. 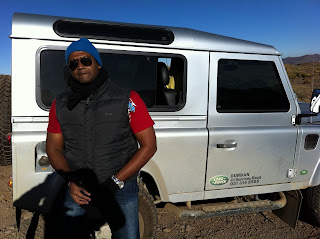 The Defenders we used were a two door short wheel base and a six seater long wheel base. I was counting my lucky stars we were in the short wheel base Defender as it is easier to maneuver around the almost vertical hairpin bends. The guys in the long wheel had a bit of difficulty with a greater turning circle. 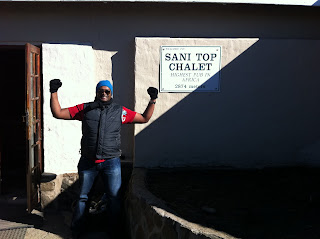 On the top of the mountain we found the highest pub in Africa at the Lesotho border post. After stamping our entrance into Lesotho we went over to Top Chalet for a drink. They don't keep beers in the fridge because they're just as cold on the shelves! We opted for the hot chocolate to keep us warm. A favorite is Glühwein. A hot wine and spice drink.

We then took a drive further into Lesotho for about 10kms. To our delight we came across snow and being men who like to act like boys we promptly wrote our names in the snow the way only boys can! 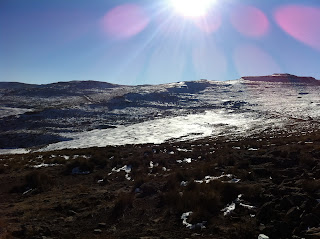 The snow capped mountains in Lesotho are beautiful. But it's a wonder how the locals live in the highest country in the world in those extreme conditions. Coming back down we hit an ice patch around a bend that sent our Landy sliding sideways. Fortunately we had a very experienced driver and didn't end up down the side of the mountain.

I really felt like we were on a Top Gear expedition and I would do it again in a heartbeat!

Would you dare go up Sani Pass? What would be your ultimate adventure?
Posted by Frank Rudy at 4:05 AM