Horward Webb: The Worst Referee In The World 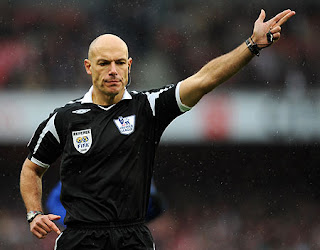 Is Howard Webb the worst ref in the world?

Recently Liverpool supporters have been hating on this man like he was the Devil incarnate. There's even an online petition by Twitter users asking the FA for him never to referee another Liverpool match! LMAO!

Here is the link if you don't believe me or if you want to add your voice to this ridiculous petition! http://twitition.com/g5iig

Surely the man that refereed the 2010 World Cup Final and last year's Champion's League final has to be the best there is or they would never have let him ref those 2 important matches!

So what does that tell you about Liverpool? According to their fans Liverpool Football Club has lost the last 5 matches refereed by Webb with 2 of them being against Manchester United! Therefore making Webb a puppet of Fergie or a hater of the Scousers!

I personally think he is a great referee! When I watch a match he is officiating I know there will be very few mistakes and no disaster decisions. Webb is a fair ref and seems to get the big decisions right according to Jose Mourinho, The Special One!

Apart from reffing the WC2010 final and CL final last year the Queen of England made him an honorary MBE.

Calm down Liverpool fans. You have a great team and a manager that finally seems to fit! You can finally say that it can be yours next year! With Dalglish leading the side and the likes of Suarez, Andy Carroll and Maxi Rodriquez making the magic happen LFC will be a strong contender for the Barclays Premier League and the FA Cup! One ref won't make a difference if you play good football!

I wouldn't want to mess with a ref that looks like Robocop anyway! Would you?
Posted by Frank Rudy at 8:20 AM