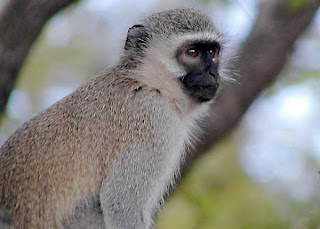 About three weeks ago I was travelling on the N3 Highway to Eston. About 10 kilometers before Camperdown a monkey jumped in front of my car.

I was doing about 120km/h when I saw a flash of grey, heard a thud and saw my number plate flip up. The next thing I know there's smoke coming out from the front of the car and I had to pull over.

I get of and go to the front to assess the damage and get the number plate only to find that a monkey was stuck head first in the grill! It was one of those little grey vervet monkeys you get all over Durban that like raiding unguarded kitchens and it was still alive and kicking!

I didn't know what to do! What condition was it's head in? How was I going to get this roadkill out? I couldn't drive around with a monkey stuck in my grill! I was thinking of flagging down a truck to get the driver to help me but I don't think anyone would have stopped on that part of the N3!

Eventually I gathered my wits and got a towel from my gym bag. I grabbed the monkey by it's legs, closed my eyes, pulled and flung it over the barrier! The monkey landed on it's side. It's eyes were open but blinking and I thought it would die anytime soon.

I took my towel and covered it thinking that it's end was near. I grabbed my number plate and jumped into my car. It took me a while to gather my thoughts and take in what had just happened.

To my utter surprise I saw the towel come up! The monkey sat up, pulled the towel of it's head and tried to take a few wobbly steps. I think it was still dazed from the knock. After a few minutes of watching the traffic go by it calmly got up and walked of into the bush like nothing happened!

The monkey didn't have a scratch on it. I guess the honeycomb grill of my car took most of the impact and cushioned the blow to the monkey. The smoke was actually gas from the air conditioner and besides the grill being damaged one of the heat sensors was kaput too. All in all damages came to R15 000!