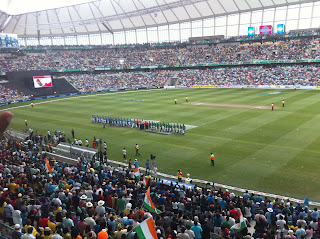 January 09, 2011 was the perfect day in Durban to host the Indian cricket team in a spectacular T20 match against the Proteas. The Indians won the match by 21 runs but the South African flags still flew high as they said goodbye to one of cricket’s greatest contributors to the sport, Makhaya Ntini.

This was the first international cricket match at the Moses Mabhida Stadium. The crowd, 50000 strong, couldn’t stop cheering as a golf car took Ntini around the stadium thus ending his career innings.

The cricket wasn’t the only entertainment that evening. There was a concert commemorating 150 years Indians have been in South Africa. Spectators were treated to stunning performances by Bollywood Stars Shah Rukh Khan, Priyanka Chopra, Malaika Arora and Shahid Kapoor. The best part of the friendship concert was when SRK called up some of the SA cricket players to demonstrate some their other talents. AB de Villiers stunned people when he belted out the classic “Yeh Dosti” from the movie Sholay!

The worst part of the concert had to be the emcees, Tarina Patel and Claudia Henkel. There’s no question that both these women looked beautiful on stage but someone forgot to tell them that they were holding mics and they didn’t need to scream for the crowd to hear them. After spending almost 9 hours in their seats people had no energy to scream when requested by Tarina and Claudia. They just wanted to see the stars perform!

As the concert ended with a spectacular fireworks display and people were heading out the stadium it looked like what our forefathers might have looked like when they disembarked the ship 150 years ago. People looked tired as it was a long day but they all looked happy and it was interesting listening to their experiences of that day as they headed home. 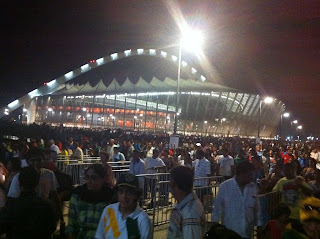