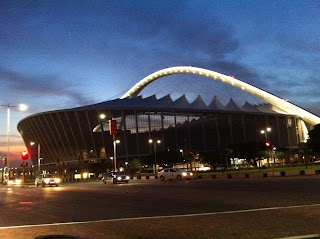 The year that has just passed must have been the most eventful in my life so far. So much has happened that it has to be documented in some way besides Twitter and Facebook. Hence here is a list as far as I can remember.

1. Went to my second Top Gear Live/MPH show.
2. Celebrated my 32nd birthday
3. Had an awesome St. Patrick’s Day at Waxy O’Connor’s
4. Met Miss India Worldwide Kajal Lutchminarian
5. Pig and Beer Festival!
6. Test drove the then new Mercedes Benz C63 AMG (awesome monster)
7. Spent an awesome long weekend in Cape Town with the boys
8. Did the big swing at the Moses Mabhida Stadium not once but 3 times!
9. Went to a few matches for the FIFA Soccer World Cup 2010 (Spain lift the cup for the first time while the world is introduced to the Vuvuzela and Paul The Psychic Octopus)
10. Won an ice sculpturing competition
11. Met the girl of my dreams but she put me in the friend zone! (I’m a big Ryan Reynolds fan!)
12. Lost about 5-6kgs
13. Bought a new car (2010 Golf VI GTI aka Bella)
14. Attended a few Airtel Champions League matches (T20 cricket)
15. Sharks win the Currie Cup (Rugby)
16. Red Bull win the Formula 1 Constructors’ Championship and Sebastian Vettel wins the Drivers’ Championship becoming the youngest driver to do so at the age of 23
17. Played my first round of golf ever and scored a 106
18. Got my first iPhone 4G and instantly became an Apple fan
19. Made a whole lot of new friends on Twitter
20. Had my first Eggs Benedict
21. Survived 2010

Bring on 2011. According to the Mayans and a few other ancient civilizations we only have 2 years left in this universe so let’s make the most of it!
Posted by Frank Rudy at 2:38 AM