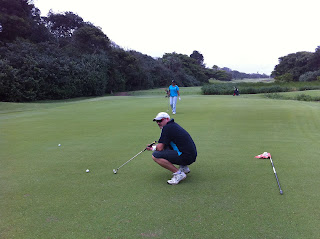 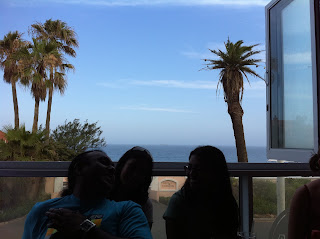 Two Fridays ago I played my first round of Golf. I had the privilege of being invited to Northland Girls High's Annual Golf Day which was held at the prestigious Beachwood Country Club. This has to be one of Durban's most beautiful courses.

Before we could tee of we had the pleasure of getting neck and shoulder massages from the beautiful ladies of Camelot Spa. The course itself has pretty narrow fairways and for a beginner it was even more difficult.

The break at the 9th hole was very welcome as the day was humid and air-conditioning was like heaven! I had to change from my chinos to shorts and felt a hundred times better but got reprimanded by the grounds keepers for not having my shirt tucked in!

At the end of the day our four ball finished 8th, which was actually last, and we got a gift pack! I was dog tired and desperately needed a shower. Unfortunately I wasn't informed that we could shower at the country club after the game so I was the only stinky at the prize giving! But I enjoyed the day and would definitely do it again!

The next day I joined some friends at Box Bar in Umhlanga Rocks opposite the Beverly Hills Hotel to watch the Bok game against England. It was close but we manage to beat them in the end. So we haven't lost to England in the last 7 games! That's showing British Colonialism!

It was a beautiful day and Box Bar was buzzing with all types of characters from Bok supporters, the occasional English supporter and a whole lot of people in weird costumes! There were sailors, pirates, superheroes, a Joker, an Alan Garner lookalike (complete with baby!) and a Russell Brand! These guys were doing a pub crawl on bikes from Harvey Wallbanger's in Broadway to Umhlanga! They were wrecked by the time they reached Box Bar and Russell Brand bumped into me and spilled my beverage! He offered to give me a shoulder rub to pay me back! It was a funny site!

It was another good weekend in Durbs and although I'm looking forward to a great festive season it's going to be hectic with all the Gautengalengs invading our favorite spots for the next few weeks! 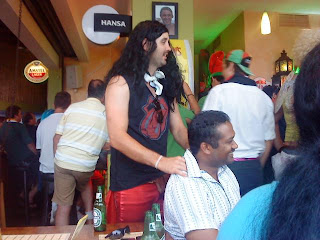