Formula 1 Has A New Champion 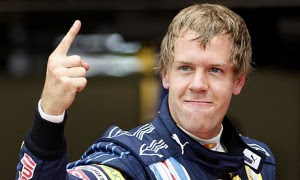 The 23 year old was sobbing with happiness and disbelief on the team radio after crossing the finish line. It was very touching and a well deserved win for him.

It was a very close race to the end of the championship coming down to the wire in the last race of the season. For Vettel to have won Fernando Alonso of Ferrari had to finish worse than 5th, which he did. Webber, Vettel's Red Bull teammate also stood a chance to take the title but he was behind Alonso the whole race so he had to settle for 3rd behind Alonso in the drivers championship.

No driver took the number 1 spot on the podium in consecutive races this season. The 2010 F1 season was the most exciting, unpredictable show ever and I am looking forward to next year's entertainment!

It is a ridiculously expensive sport but worth definitely worth all the drama and excitement!
Posted by Frank Rudy at 11:33 PM