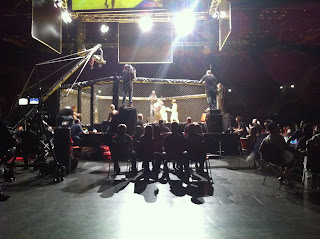 What is it that fascinates us with violence, blood and pain? Last Thursday I had the privilege of sitting ringside at the King Of The Cage Platinum fight between Ken Shamrock and Mike "The Rhino" Bourke!

Both of these MMA fighters are over 40 years old, but they were fit as horses! Well Ken Shamrock looked fitter than most of the younger fighters that competed that night. He's 46 years old and looks like he could outrun a 20 year old athlete!

But his fitness didn't help him much because The Rhino took him out in the second round. Ken had to forfeit after pulling his hamstring. Maybe it was his advanced age or pure luck but the winner was Mr. Bourke which also made him a great gift because it just happened to be his birthday as well!

The MMA community is very interesting and appealing in a way. The first thing I noticed is all the hot women walking around! The Durban ICC was crawling with hot pieces everywhere I turned! Some of them had to be swimwear models! The second thing was the guys! Most of them looked like they were having horse steroids for brekkies, lunch and supper! I definitely didn't want to step into the ring with any of them or look twice at their girlfriends!

The after party was at FTV Florida Road and I had the pleasure of meeting the champion, Mike Bourke. He is very approachable and a nice guy all around!

I will definitely be attending the next MMA cage fight. If not for the blood and violence but for the plentiful eye candy that surrounds this sport!
Posted by Frank Rudy at 10:38 PM