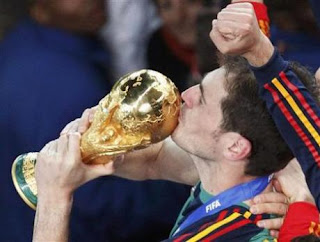 Well it's over. I was really preoccupied during the whole thing that I didn't really have a chance to enjoy it.

I managed to attend three matches though. Spain vs Switzerland, Nederlands vs Slovakia and the semi Spain vs Germany.

I had some issues to deal with and I couldn't take part in all the festivities that were happening all over Durban. So my dreams of meeting beautiful foreign chicks from Spain, Argentina, Brazil and other exotic places were not realised.

You could say that I'm immune to the phenomenon called Post World Cup Depression then!

Some interesting features in WC2010 were of course Paul the Octopus! Poor Germans. And Phillip! SABC had a catch phrase "Feel it! It is here!" which due to pronunciation by most locals evolved to "Phillip! It is here!". So Phillip was born.

Who could forget the green haired Zakumi which was supposed to be a leopard but looks more like a mangy lion but won the hearts of many South African kids including that of my 2 year old niece!

I was really looking forward to seeing a barrage of goals from the likes of Wayne Rooney, Lionel Messi, Fernando Torres etc. Christiano Ronaldo managed to score a really weak goal but wasn't entertaining enough.

I did back Spain from the beginning and wasn't disappointed by their performance.