The Little Master Does It Again! 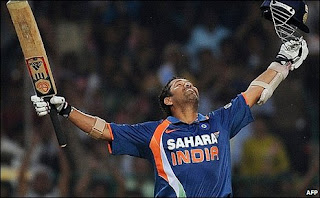 Wow! What an innings! Sachin Tendulkar doesn't stop breaking records. It was a pleasure and a privilege to watch this master demonstrate his skill against a bewildered South African team!

First he makes a century! Something he accomplishes with ease when he's in form. Then he breaks Charles Coventry's record and then becomes the first batsman in ODI history to get a double century!

If I wasn't a South African supporter I would definitely be cheering for India to win this match. But I am! Let's just say I am a Tendulkar fan then!
Posted by Frank Rudy at 5:40 AM