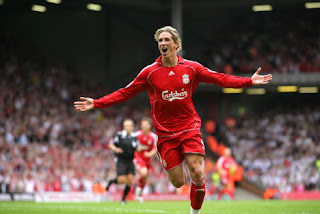 I had a really bleak Monday yesterday! Well the whole weekend was bleak. Spurs lost at home to a really lucky Stoke! United lost to Liverpool. Was a good game though. Torres was nowhere the entire game till he scored the Scouser's first goal and then was substituted. Ngog's goal wasn't as impressive but sealed the deal, and now United has 3 defeats in a row against the Scouser's!

Yesterday started of dismally. My meeting with the stake holders had to be cancelled cos only one of them decided to pitch! How do they expect me to deliver good service if they don't commit to a monthly meeting?

Final appointment was in Pinetown so decided to bail early and cruised the Pav for a bit before hitting the gym. On my way out I met an angel that made my week! Met her at one of the IPL matches earlier this year and she agreed to go out soon. That's an investment I'm definitely going to cash in on!

So Monday started of bad but ended with a pleasant surprise.
Posted by Frank Rudy at 1:21 AM