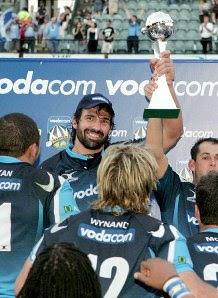 And I don't mean drinking of any kind of beverage being alcoholic or non! But this is done when watching events were a cup is being lifted.

Two were lifted this weekend and watching both events were very inspiring. I can only imagine the feelings going through these athletes when they finally reap the rewards at the end of a long season of hardship. Two teams that had the privilege of experiencing this. One was Chelsea when they beat Everton. Everton didn't come out empty handed though. They walked away with a new record against Chelsea. The fastest goal Chelsea has ever conceded.

The other cup lifters were the Blue Bulls. Winning the Rugby Super 14. Victor Matfield's winning speech seemed short. I guess he was in a hurry to lift the trophy. At least he didn't climb the uprights like the last time. I was moved with the Chiefs captain, Mils Muliaina's speech. A nice touch at the end with the "baie dankie".

I had to PVR the end of the Super 14 final cos I had to go to a Winter Ball. Some friends laughed but it was in the aid of a charity.

I don't remember the last time I lifted my cup so many times before. I guess that could have been alcohol induced.